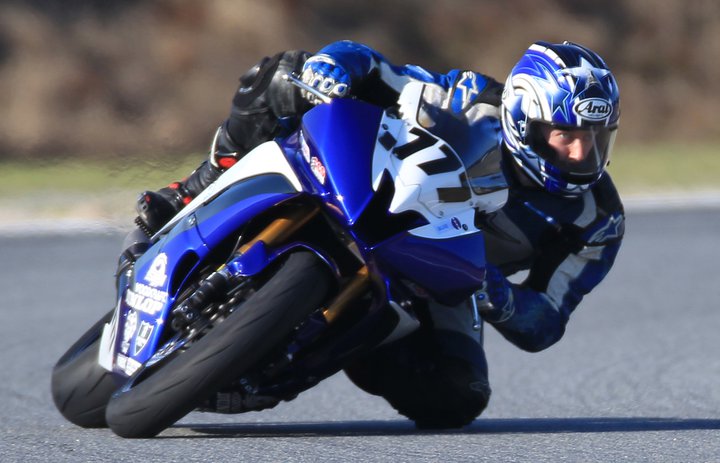 Bloomingdale, GA   Temperatures in the mid-seventies set the stage for potentially record-breaking lap times as the paddock prepared to compete in Round One of the 2012 Michelin PRO Series.  A number of past champions were on hand and the action got started with Michelin Pro SportBike.

Ricardo Valdez qualified on pole for the Sportbike sprint, but a jumble of riders on lap one sorted resulted in Valdez dropping to fifth at the back of the lead pack. Mark Miller, Jr. took advantage and snatched the lead from the other four with his Livengood Motorsports-tuned Yamaha.  Scotty Ryan, whose qualifying effort lunched the motor he had planned to race with, used his R6 to nail down a space right behind Miller.  Stefano Mesa was third on another R6, and Matt Brown was fourth on a Kawaski as the gaggle headed for Turn One on lap two.

As the group cross the line next, it was Miller from Mesa and Valdez, then Ryan with Curtis Murray pulling his Suzuki up to fifth.  On lap three Valdez showed everyone the power exhibited in qualifying by moving to the front of the lead group with Miller, Mesa, Ryan and Murray just milliseconds behind, and one of the hottest contests of the afternoon was stating to come to a boil.

Valdez and Miller duked it out for the next four laps, but as the race was winding down to its conclusion Miller made his move to take the lead on lap nine. Miller maintained the edge around the 2.02-mile road course, and as they came to the checkered flag it was Miller and Valdez literally shoulder-to-shoulder at the flag. Valdez squeaked across the line first but got some unhappy news at tech inspection with a pretty clear rule violation and his subsequent disqualification, which resulted in the win going to Mark Miller.

Miller told us after the race, “The race was good.  I was throwing my laps down and saw (Valdez) pulling away.  I put my head down to try to time it out perfectly to get him over the line.  I gave him the last lap.  I was right behind him and thought I could get a good drive out of the last corner, but he just took me at the line.  The Dunlops were awesome.  We couldn’t do anything without Brian Livengood’s motor work.  Hat’s off to Tim at JRi; he really helped me out.  I want to dedicate this to Jim, because I know it would mean a lot to him.”

Miller’s reference to Jim was to 2011 CCS Mid-Atlantic Champion Jim Cohrs, who crashed on Saturday and was airlifted out of the track. Cohrs returned to the track to visit late Sunday afternoon.  Cohrs was a little banged up, properly braced, and in good spirits.  Cohrs’ tumble in turn one was the result of his front brake lever contacting a competitor resulting in a spectacular endo that launched Cohrs from the bike in epic fashion.

In Michelin PRO Sportbike Stefano Mesa finished behind Miller in the runner-up slot, Ryan was third, Murray was fourth and Justin Holderman rounded out the top five on another Yamaha R6.